Grumpy gets a new lodger.
The wagons neeaarly reach the plains beyond the jungles.
Everyone is attacked by very small pteradactyls.

Also due to recap inflation I have endeavoured to keep this recap actually snappy for once. Tell me what you think! 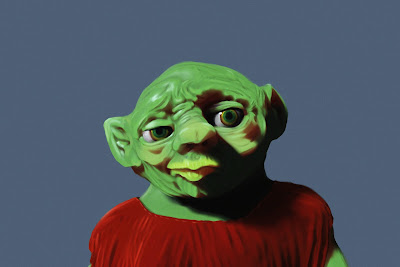 
New Backstory:
- Grumpy helped run some suspected villains out of his town. +1 Strength
- Andromeda had a POWERLAD time-clone escape her man-farm during the early years of the apocalypse and join another Andromeda. Her revenge was petty in the extreme. Once per round, deal 1 point of damage to a creature that hit you.
- Big Smiles of the New Moondin Lost Boys stopped a lynching back before the Brotherhood took over New Moondin. As an action, block an attack against someone nearby but take half the damage.
- Red has owed her life to Andromeda on many occasions, saved by healing and lightning shields. Once per session while they’re nearby, drop to 0HP to cancel all Death Dice they have accrued.


--- Grumpy and Gifflewim
- The rest of the party see Grumpy vanish as he flips a coin into the air. It is the coin Gifflewim gave him in case he ever needed the assistance of the strange merchant Elf.
- Grumpy attempts to trade for a purported future bug fix for Fate, time-travelled to the present day by Sir Robyn. He offers Dwarven vitality for a limited time, amongst other things.
- There is a catch, though. Gifflewim transports himself to the infinite cyber-prison in which Snels is trapped and tries to start a bidding war for the future of Fortress-City Fate, playing the two foes off against each other. Grumpy wants the antivirus, Snels wants to return to the world.
- In the end, after a rain of Styxes forces the Elf’s hand, he gives them both what they want… to a point. Grumpy receives the antivirus for Snels’ cyberattack on Fate, but the reset messes with the rebirth system. Snels returns to the world… but he’s in Grumpy’s head. Between him and Styx’s earpiece-iteration it’s getting crowded in there!
- Gifflewim vanishes, laughing at how wonderfully he’s fucked everything up for them. Never trust an Elf!

--- Welcome to the Jungle
- Meanwhile, elsewhere, the rest of the party have been slowly slowly trying to get their carts full of food through the trackless jungle and out into the plains beyond, and the crashed spaceship full of modern conveniences they know is out there.
- On the way they meet Indomio and Goolliet, a man who wears a female goop creature like armour. Their relationship is... interesting.
- Nevertheless, they continue. In a particularly dense copse of trees Grumpy and Red manage to catch up… just in time for them to be beset by shrieking flying beasts! They are Yi Qi - winged dinosaurs!


--- Jungle Rumble
- The Yi Qi are weak but numerous, swooping from the trees to savage the party with their sharp fangs! Andromeda commands her monstrous proto-elephant thrall to smash them from the skies with its long trunk, which is does at the expense of overturning its cart.
- Grumpy forces the flock to the ground with expert beam rifle use, then gets one of them caught in his beard! Red uses her impressive duelling abilities to slaughter several at once. The Lost Boys blast haphazardly into the skies.
- Andromeda keeps grabbing them and draining their blood to feed herself. An attempt to whip one out of the sky and down to her fails though, and her whip is caught by the dinosaur and carried aloft! She turns into a bat to follow, but the other Yi Qi grab her bat-form! Her whip is lost!
- By the end of the fight, Grumpy has captured a couple of the creatures in his beard and Red has one by the neck. The others are gone, either killed or fled. Andromeda looks full… and somehow more wise than before.
- The corpses are gathered and field-dressed by the hungry party, always on the lookout for new culinary frontiers