I can't really believe this, but Ratman the Ratman is now Level 8.
64 rats at a time! Iconic.

Not one but two Big Treasures were found this session, precipitating a rapid rise up through the ranks. Good work!


Also Ollie grants us an exclusive look at Scarlet Eclipse, the boy out of time. 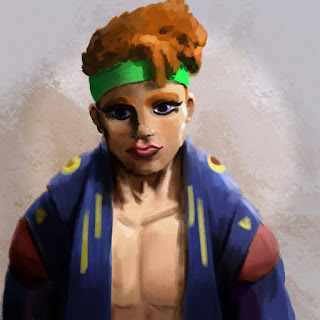 
New Backstory:
Scarlet Eclipse’s mother was threatened by an ancestral vampire enemy. Scarlet Eclipse and a band of muscular friends went on an interplanetary adventure to defeat him and his champions. +2 to hit vs more powerful enemies.


--- Into the Mines
- Underground in the Stygian gardens, we begin with the gang in the underground shed room.
- They grab a few gardening tools and swiftly unlock the secret door to the south, coming out into a hidden laboratory. A map and a bronze acorn are on the table, along with several potions. All are taken.
- The map shows a plan for a dig site, and the acorn allows one to speak with intelligent plants! Red takes the acorn to see the talking tree from last session, and basically discovers that the tree-talking puzzle got short-circuited by Beepbox’s powers.
- They head down into a dig site, conveniently enough. Snooping around gets them to a few apparently-collectible pickaxes and an area with some barrels and a strongbox.
- Beepbox tries to open the box, but it’s no good. He takes long enough that horrible sulphurous fumes suffuse the area! They run out with the lockbox and take shelter in the stairwell back up.

--- Batty Old Woman
- They wait it out and go back in, coming face to face with the ghost of Abelia Prem! She confronts them about the theft of her rose (despite, in fact, holding a rose) and the ruckus brings forth bats!
- Red kills the bats.
- They continue and soon find a hole down into depths unknown with a distant pale light. Spoopy.
- They go down the fairly steep flume and come out into an area with a bunch of well-preserved Dwarf corpses.

--- The Rats and the Rose
- Scarlet Eclipse skulls a potion and engages Past Sight, seeing what happened to these Dwarves. They fell down the flue when it collapsed and they all died, except for one who went further in.
- They follow the shade and see him collapse at the edge of a pitch black river, hammer falling from his hand.
- In the present, there’s a rosebush with a single black rose growing at the edge of a black river. Experimenting with the river via rats reveals that it sucks anything that touches it into its depths.
- The rose is plucked, taken by Red as a hair ornament. Some vials of the dark water are taken via Unseen Servant - it hurts living flesh.
- Also found is a hammer tangled up in the briar. It’s made of skin drawn over metal, a little hairy, and warm to the touch. Yuck. Ratman claims it.
- They also try putting some of the bloody water from the tree room above on the bush. It accelerates the growth somewhat.


--- Wine Knight
- With time to spare, they explore more of the place. A side tunnel of the dig site is found to contain a smaller tunnel marked “now we drink” in Dwarven. As they’re deciding what to do, the sulphurous fog starts rolling in! They decide to escape down the smaller tunnel!
- Ratman’s well-suited to the rathole, Jeremy uses a cantrip of Flesh Goop to get floppy enough to fit, Scarlet Eclipse makes do, and Beepbox drinks what he thinks is a Potion of Diminution. Unfortunately it’s a Potion of Delusion and he only thinks he’s small!
- Shenanigans occur, some people get gassed, and they get to the end of the tunnel to find that it’s a sneaky way into the wine cellar!
- They hunt around for some expensive wine and, in a 1/100 chance, find the most expensive wine in the entire place! It’s Black Rosé, created from the grapes that grow upon the black rose bush, and extremely rare. Rumour says it was intended for the Pope.
- Celebrations aside, booming footsteps are heard! It’s the Knight they’ve been warned about!
- Red drinks a potion with a muscle man on it and finds herself incredibly strong! It’s a Potion of Giant Strength baby!
- Red’s incredible strength gives her insane anime powers, and despite Ratman accidentally shooting Beepbox and Beepbox’s delusions of shortness, her ludicrous attack bonus soon brings victory!
- In the aftermath, wine from smashed bottles glugs across the floor and a no-longer-deluded Beepbox celebrates the kill he definitely made by throwing a rat at the statue while small.

--- Old Father Toad
- Using the last of the super-strength, they run about smashing down doors. One corridor has busts with greenery growing out of their heads as hair. Another has gilded cages with songbird skeletons within, which Jeremy swipes into Hammerspace.
- They came across a pool of stagnant water with a big domed window above. Ratman lobs a few rats in and they are pulled underwater one by one. He throws in the rest of the rats, and they die horribly, crying out “whyyyy?!”
- Two big froggy eyes pop out of the water, followed by a big froggy face with a seaweed beard. He calls himself Old Father Toad, and he lives here.
- The party toss him some stuff, and he gives them gifts of his own in trade. Some chain, a small statue of a frog, and some Alterket. Apparently he loooooves ket and can barely feel his tongue, which is odd when you’ve got a tongue as long as his.
- They leave the drugged-up toad and head back to Shrub-Nigeria’s place with no problems on the way. A very successful trip!