New Backstory:
- Iskander's town was beset by football hooligans in the pub, and helped Zulu chase them out before they burnt the place down! +1 Strength
Events:
--- The Dark Descent
- Down a long thin tear in the Earth, hanging by fingertips and squeezing through thin and claustrophobic cracks, our heroes descend down the twisting throat of the world. The liquid darkness oozes away from their light.
- They scrape through a tight squeeze and find themselves climbing up and out into a larger cavern that seems to have been eaten through by some great worm. There are whispers. Zulu dims the light.
- Bodies lie in the gloom. Fresh blood, so recently dead. Some have bites taken out of them. A cautious look reveals the ground has been set with thin wires, hammered into the broken rock and pulled taut. They try to lassoo a body and pull it towards them to investigate, but the corpse is cut to ribbons by the razor wire as it's dragged along the ground.
- It seems impassable, unless they climb the walls. Not going to happen. 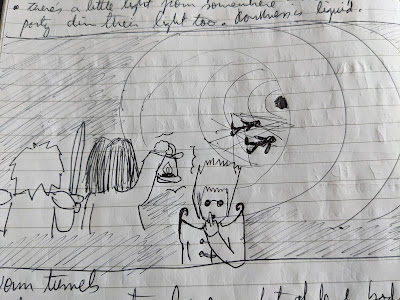 --- The Legless Man and the Man-Legged Mantis
- They try to find a different way and soon find one. The Earth is riddled with caves, it seems. Crawling sometimes on their bellies, sometimes curling through cracks. It is in one of these long thin crawls that they hear a voice!
- They approach and see a man with a pith helmet and one leg trying to fish something out of a hole. It's his own leg! They ask him how he got here, and he tells them he was exploring an ancient temple, went through a crack on the lowest level, and never found his way out. His name is Huswan and he has been cursed by a witch! His leg is fetched from the hole, for which he is grateful, and he reattaches it. Witch curse, you see.
- Suddenly there is movement from the dark! Liber Quint is grabbed from behind by great mantis claws! It's almost invisible, entirely translucent. In the cramped space tactics are extremely limited. Celebus tries to stun it, but gets stunned himself.
- Liber shuts her eyes, reaches for the magic, and lets it run wild. Pure chaos surges through the dark, briefly lighting the walls with rippling energies. Both she and the mantis fall to the floor of the thin cave, unmoving.
- The corpses tremble and burst! Clawing their way from their former bodies, each being claws from its meat chrysalis and stares. One was reincarnated as a Halfling, panics, and immediately knocks itself out on a rock. The other was reincarnated as a human-shaped mantis being, calling herself Amanta. She seems, while confused, friendly enough to join the party with her Specialist mantis climbing skills.
- They talk to Huswar and find that he's a conquistador from Spain, who investigated a stepped temple in the search for the mythical city of El Dorito.
- Celebus kills the Halfling and reanimates it as a zombie.
- Meanwhile Huswar's arms and legs are going absolutely haywire as the result of a trigger word. He asks to die too, and tells them to avoid the Deep Witch. Celebus kills him and reanimates him as a zombie.
--- Knotsmen City
- They follow their current tight squeeze of a corridor for hours or days, time is meaningless underground. The way opens up sometimes, or requires short climbs, but leads ever on.
- They crawl under a shelf of stone and suddenly find themselves in a vast underground cavern! A grand citadel is built into great edifice of stone, and a queue of dim glimmering lights snake up to a gate lit by lanterns.
- The queue is a queue of Knotsmen! They are waiting to get into the great tiered city and are not immediately hostile. Celebus spots a tradesman's entrance and investigates. The guard is bribed with Ferfect Fried Chicken and they sneak in.
- Guards are all over the place, unfortunately. They are stopped and asked for their permits, which they clearly don't have. More chicken is a sufficient bribe, and permits are hurriedly signed.
-A Knotsman with so many bulging knots of veins forcing him to bow over sees the commotion and comes to look. He casts a spell on Iskander that makes him own Iskander's very bones. A bribe is sufficient to reverse the curse.
- They continue on up to a market. Food is good currency here, and they trade some for a picture of a dead castle with an ominous look to it.
- Further up, only Knotsmen may go. They offer some of the last of their chicken to some Knotsmen up there, getting handfuls of precious gems in return. They're hooked on the chicken and wish to know the way to the surface where they might find more. The party looks in confusion at the gems - these would make them rich on the surface world, but down here they're being thrown at them like cheap beads.
- As we close the session for the day one question remains... how the fuck do experience points work when somethings' value is perceived so wildly differently?? Find out below!
Total: 5000 exp
Valuables:
- A daguerreotype of a city in motion, blurred people walking through the long exposure. Some still figures must not have moved. In fact, one seems to be looking straight at you... (1000 exp)
- A string of flawless diamonds, worth 5000 obols on the surface. (500 exp)
- A single perfect emerald, worth 1000 obols on the surface (100 exp)
- Two handfuls of loose diamonds, worth 10000 obols on the surface (1000 exp)
Total: 2600 exp
Defeated Foes:
- A mantis shrimp, reincarnated. (250 exp)
- A recently reincarnated Halfling, murdered. (10 exp)
- An 'armless spanish conquistador (5 exp)
Total: 265 exp
Exp Totals:
- Ollie / Iskander Fullbeard, Level 4 Fighter: 11848 (Level up at 16000)
- Charles / Celebus Uppytus, Level 4 Necromancer: 10264 (Level up at 18000)
Level Up! +1d4 HP! +1 Mana! +free spell! +backstory!
- Kitty / Liber Quint, Level 3 Bibliognost
*REBORN*
- Kitty / Amanta, Level 2 Mantis Specialist: 2622 (Level up at 3500)
Level Up! +1d6 HP! +2 skill points! +backstory(?)
Posted by James Young at 06:58