Session 320 - Sightseeing in my Flesh Balloon

Moon: Third Quarter - Dragonwane
Zenith: Oberon
New Characters:
- Jojo Fullbeard, Muscle Wizard daughter of Iskander who was once a Disaster Repairperson.
- Parabolus, a Specialist who specialises in... ventriloquism. Has a ventriloquist's dummy.
New Backstories:
- Suspiria attempted a forbidden spell and accidentally turned her entire school into an illusion. Countless lives lost and replaced by illusory simulacra. She went into hiding as a result, ending up as a taste tester at Ferfect Fried Chicken.
Events:
--- USS Abomination
- Negotiations have taken place atop the flesh tree Dharga. Aemilius will join the tree as Emperor - less a balancing force and more of an unhinged Emperor who will demand tribute and cause enough internal bickering that the Dharga will be reduced as a threat.
- Also, the Meatlands will be pulled back to the base of the tree, no doubt by merely cutting off circulation to the Meatlands proper. It's August, so the hot sun is sure to make the miles of gangenous flesh smell real good and tasty.
- Finally... they want a ship... 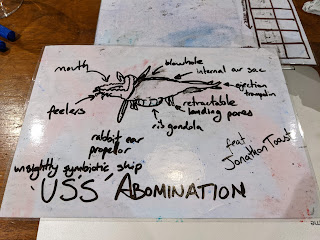 - The Unsightly Symbiotic Ship Abomination is formed!
- Featuring the dulcet tones of Jonathon Toast whose brain has been sacrificed and "upgraded" to form the ship's Awful Intelligence, the ship is huge and rather stupid. Suspiria's familiar loves hanging around the blowhole and pretending to be smoke from the engine. Most of the organs are in the rear, and there's a big Bucket Extrusion And Manipulation device known as the B.E.A.M. to transfer them up and down from the ship. It's... perfect!
- Swan the Swift retires to oversee the Wheatlands project. A wandering ventriloquist named Parabolus arrives conveniently.
- Iskander spends a little while in some sort of poorly explained time travel plot wherein Samantha Bread bears a child - JoJo Athena Fullbeard.
--- Neo-Spacedin
- After some time with all this, they set off on the USS Abomination! First stop - Neo-Spacedin.
- From above they can see the shanty-town that has sprung up around the crashed UFO. They land on the ship's retractable widdle  paws and disembark into what seems suspiciously like a quarry in Wales.
- There are a whole load of bright green blobs dotted around singing about how their god has come! As the airship takes off Parabolus throws his voice to make it sound like the airship itself is speaking and calling the party the emissaries of God.
- The blobs ask where the party is going and they tell them it's Neo-Spacedin. The blobs are all "oooh we can take you there! Help us get in so we can chill!". The party is suspicious.
- Nevertheless, the blobs do lead the party to town. A man in a watchtower holding a laser rifle hails the party... but warns them not to let the blobs in because they drank all the booze. The party get in, accidentally letting a blob or two in, and leaving the disappointed remaining blobs to wheedle at the guards.
- The party hits up the local pub, an extremely tacky reggae themed bar called the Rastaroid. They are, in fact, out of booze. The slimes drank it all! 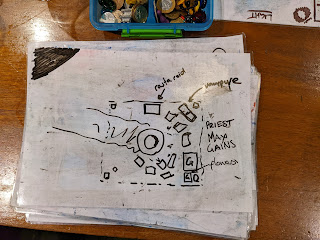 --- Oven Pizza Horror
- The crashed spaceship is examined and the matter replicator is still stuck on hawaiian oven pizza mode. It turns out all the town's booze is pineapple liqueur made from the pineapple people pick off the pizza.
- [[[Extended jokes and several people crying with laughter here]]]
- There is extended discussion about whether they should try to fix the replicator, because what if they break it? Jojo manages to at least make the pizza come out faster so it doesn't start out reheated. The townsfolk are overjoyed and rename the Hawaiian pizza to The Jojo Pizza.
--- Other Residents
- In town there is a mysterious statue that speaks only in Psalms, worshipped by priests which dragged it here from the wastes. It's the original Snels!
- The Hyperchurch of POWERLAD is the town's main church. The grave of Flowers Penurious is here in the graveyard where grieving worshippers bench-press the gravestones.
- A house with darkened windows contains some vampire refugees. They are a bit pathetic, begging for blood. Suspiria decides against giving them some blood in exchange for a weapon.
- The vampire Luna tells them that Bertha still rules Mt Death Frost, and Cyrus has not been seen for years.
- Swan the Swift briefly arrives with an investment opportunity - the Wheatlands! Wheat beer to change up the pineapple liqueur, and non-pizza wheat products! Plus the vampires can have thrall serfs and be feudal lords! The townsfolk seem pretty pleased with the idea.
- A colony of Mod Cons still reside in the ship, where they have a gaming area set up. Each person in the party persuades a random Mod Con to come with them, from a dimmer bulb for Jojo to an electric toothbrush for Dorian!
- Suspiria, at a blob's behest, kicks it and catches the smaller blob that comes flying out in a bottle. It's a familiar in training! The smoke familiar is immediately jealous.
- Finally, Parabolus asks about the emergency transmission they picked up in Enoch. It was a transmission from Neo-Spacedin to encourage refugees from the growth of the Dharga and the fallout of the diamond dome being destroyed. They are taken to see a special guest... Grumpy the Dwarf!
- He's rocking slowly on a bed next to a stack of uneaten pizza, occasionally mumbling about having lived a thousand thousand lives. Sometimes people emerge from Fate far above, and they're compos mentis but have no memories, and integrate into the community. Grumpy is a little different though, and they don't know why.
- Sounds like someone should investigate Fate!
--- Ascending to Fate
- They return to the ship, satisfied that Neo-Spacedin is going alright and has some interesting stuff going on.
- Ascending back to the ship in the BEAM, they realise that some of these blobs have clung to the bucket! They're stuck under the bottom of the bucket for now, but they might escape...
- Suspiria installs the Mod-Con Playstation in the Hollow Deck. It only has xbox games but who knows what the future might bring?
- They ascend into the evening sky, turning towards Fate, and blimp their way up and up.
- Lights glimmer below. Fearing air defences, they kick a blob off the ship... nothing. No lasers, no defensive turrets... just light and the faint sound of chatter and music.
- The blimp docks at the only place it really can - the top of the spire of the central sundial-shaped palace! The crew BEAM down, to loud gasps from the crowd below!
- It's just like old times. The steam and cogs of the great Fortress City, the streets filled with hurrying masses, the crowds in clothes from before the end of the world!
- Guards show up in sundial hats, of course. The entry was not exactly subtle. They demand to know who authorised this flesh balloon in the simulation! The party asks them to take them to whoever's in charge.
- Suspiria, hiding behind her mask, is nudged by someone in the crowd. She's been mistaken as a member of the Masquerade faction... but fails the secret codephrase and the person vanishes into the crowd.
- The guards take them through an official looking door and into a sort of backstage area. It turns out Fate is all a big LARP! They meet the LARP coordinator for this area and she's baffled that the party, and the airship, came from outside, she thought everything out there was meant to be dead!
- Suspiria casts Old News, causing everyone within a mile to think that the party's arrival is old news. Known, but not remarked on much any more. The party have entered the LARP...
Total: 6000 exp
Treasure:
- Mod-Con Dimmer Bulb
- Mod-Con Playstation 1 w/ xbox games
- Mod-Con TV Remote
- Mod-Con Electric Toothbrush
Exp Totals:
- Kitty / Dorian "Ditto" DeMone, Level 5 Inheritor: 28109 (Level up at 36000)
- Tom / Suspiria, Level 3 Magic-User: 6184 (Level up at 9000)
- George / Parabolus, Level 1 Specialist Ventriloquist: 1600 (Level up at 1750)
- Ollie / Jojo Fullbeard, Level 1 Muscle Wizard: 1600 (Level up at 2250)
Posted by James Young at 07:22