Session 298 - Tested by the Bone Lord

New Backstory:
- Astro Moon ensured that her anime enemies suffered... through her long and clearly reused transformation sequences. Once per session, threaten someone to make them tell you the truth. 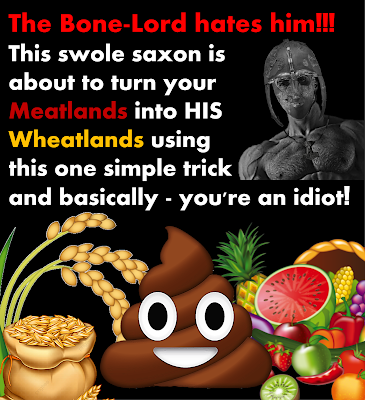 --- Breakfast in Salivasburger
- Down a cobbled alley flowing with sweat, nestled between half-timbered Tudor style houses fixed up with chunks of flesh and pasted-on skin, our heroes wake up in the Steak and Ale inn that they paid good meat-money for and head down to breakfast.
- Iskander checks out the buffet with an expert eye and identifies the Beefy Haunch as a better and less mutagenic option than the Chubby Beak. He's also got a ring of sausages around his neck - clean meat! - so he's living large.
- And lo, Swanny is here! Walking down the street into Salivasburger! Iskander runs to meet him jubilantly, throwing his arms around his rival and sticking a "kick me" sign to his back. It transpires that in the night, a head on spiderlegs with skull facepaint tapped on the window and left a note saying to follow it in the morning because they "must be tested". 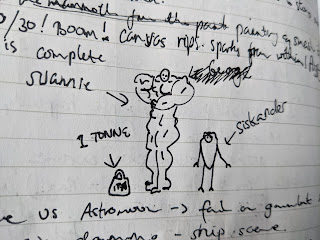 - An old lady sees Iskander's sausages and begs for one. Some guards see this and wander over. The talker is Medium Baz, different to Big Baz, Boss Baz, Big Boss Baz, Small Baz, and several other Bazzes who live in the town and work as guards. He won't take bribes, but he will of course take gifts for his family.
- They chat for a while, and Astro Moon spots the white skull on a nearby awning. They decide to follow, though on the way they briefly meet some mad scientist type who's going out of the city to test out his cool new arm-mounted gun. 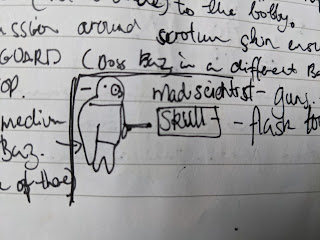 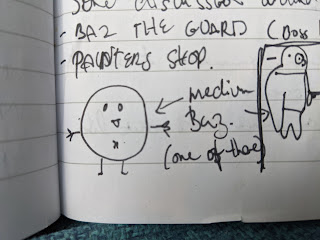 --- By the Black Pudding Market
- They follow the white skull to an abandoned painters' studio. They also see the entrance to the black (pudding) market, with furtive people heading into a nearby door that leads down somewhere sinister.
- Iskander trades some sausages for a gold necklace a lady wanted to pawn off in the market below, so he's saved her a trip!
- The white skull-spider whispers that this was not a heroic act, and their current hero test grade is F. Iskander tries to argue the contrary to no avail.
- Swan tries to tell her that she can grow plants in poop, but she isn't buying it.
--- Into the Painter's House
- Astro Moon has now arrived, so the three go into the house where they will be tested. Inside it is smoky and barbeque-y. Unfinished paintings are in the hall.
- The paintings come alive! Luckily Swan was due to destroy someone with his bare hands and the paintings will do. The northern barbarian themed paintings go down fighting, Swan smashing two over a convenient banister while another shlurps into Astro Moon and damages her brain.
- There is a fizzing electric sound as the paintings are smashed, which soon shuts off. The white skull-spider observing tells them that they're currently rated D. 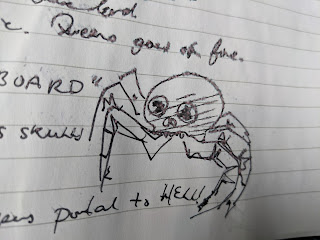 --- Dining Orb
- They head into the next area - a kitchen diner. Placemats with various names (including Bashir, the mysterious painter) are set around the place. An orb is suspended over the table, glass and gold. Iskander looks under the cloche in front of Bashir's seat and finds a smaller version of the same - it's some kind of electro landmine.
- Through some doors is a small lounge. There's a persian rug which Astro Moon immediately sits on in the hopes that it's a magic carpet. Alas, but probably worth a few sausages. Also in here is a silver engagement ring dedicated to "Mina".
--- Battleflies
- They go up the stairs and into the painters' studio. The smoke is thicker here, and colours weave in the mist. The colours resolve into big gauzy insects! The battleflies engage with claws and stingers! 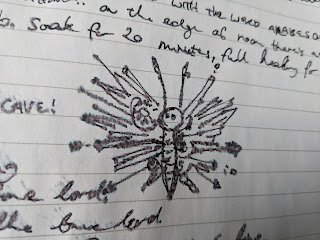 - They are defeated with some effort.
- As they fall to the floor, puppet strings cut and papier-mache stingers destroyed, there is a roar! A huge skeleton with a big rusty sword emerges from a stairway and announces that HE IS GUIDO!
- It's another fake. Iskander rolls the electro landmine towards it and pulls the trigger on his control orb. False Guido the Bone Lord falls over in a raggedy heap.
- They check out the bathroom and find an arcane bath bomb that allows a spellcaster to recover their Mana with a good soak. Neat!
--- Welcome to Hell
- It's getting late, so they decide to rest in a cupboard. But what a cupboard! Inside there are two dessicated heads in the middle of some sort of ritual pentacle with wax candles and everything.
- Iskar puts the engagement ring on a corpse... and a portal opens above the pentacle! Within is a vision of HELL!!!
- Dun dun duuuuunnnnnnnnn!
Total: 7000 exp
Treasure:
- An unmagical carpet (50 exp)
- An engagement ring (100 exp)
- An arcane bath bomb
Total: 150 exp
Foes Defeated:
- Living Paintings (300 exp)
- Battleflies (500 exp)
- False Guido (250 exp)
Total: 1050 exp
OOC:
- Chronicler / Chef - Izzy
- Expedition Leader / Vanguard - George
- Paymaster / Quartermaster - Ollie
Exp Totals:
- George / Swan the Swift, Level 5 Barbarian: 26498 (Level up at 32000)
- Ollie / Iskander Fullbeard, Level 5 Fighter: 16302 (Level up at 32000)
DING! +1d8 HP! +1 to hit! +1 to crits and fumbles! +backstory!
- Izzy / Astro Moon, Level 4 Muscle Wizard: 12262 (Level up at 18000)
Posted by James Young at 08:36