Moon: First Quarter
Zenith: Alaunus
New Backstory:
- Celebus let a mob chase the Goblins into the internment zone after their government collapsed in New Moondin, for justice. +2 to hit creatures you saw harm innocents this session.
-Amanta's mantis partner left her for another mantis... and her vengeance was swift and head-bitey. Auto-crit a creature that takes you to 0HP.
Events:
--- Out of Charge
- In a massive nostril out in the meatlands, two giant meat mechs loom ominously over the party. There is one problem - they're out of power. The great umbilicals that connect the mechs to their mysterious power source are only found in Salivasburger.
- Luckily the spider-skulls that helped Amanta to control the Siege Mech know the solution - dragon cores. These meat mechs can be powered directly by the remains of a dragon. Funnily enough the team knows where to find one, since they did after all just kill a dragon. 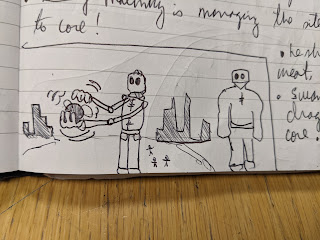 --- Dragon Experts
- They leave the mechs in the care of the spider-skulls and schlep it to the city. There is a fair amount of disarray since there was a whole dragon explosion and everything. The Meat Mech hangar itself has had countless houses sucked towards it and crumbled in the dragon's death throes.
- Swan the Swift marches proudly in and declares himself a dragon expert! See his shield with a dragon on it? Proof!
- The befuddled meat men Swan and his "interns" in towards the dragon core itself. A big skinny meat mech with big oven gloves on its massive hands gingerly handles the core. It's being driven by Skinny Malinky and a couple of others. Swan declares that the core is dangerous and radioactive and likely to explode!
- Malinky falls for it hook, line and sinker. He disconnects his mech's umbilical and runs to the wall, grabbing a new one from the wall itself. Behind him, Eegor licks some of the glowing bovril leaking from the abandoned umbilical. He seems... fine?
- Malinky drops the dragon core as far from the wall as he can, and watches the "experts" drag it away in one of his mech's massive oven gloves.
--- Worm Hunters
- By the time they reach the nostril, the core is a bit battered. About a tenth of it has broken off.  They install the tenth in the Assault Mech, powering it up for a cool hundred minutes, and put the rest in the centauroid Siege Mech which gets a whole nine hundred minutes of power!
- They ride off into the wastes, with Iskander clutching his medallion which is meant to summon snakes and hopefully worms.
- It works!... too well! A cathedral-height worm erupts from the meaty ground, grinding towards the suddenly dwarfed meat mechs! The chaos storm that swirls around it forces everyone to swap character sheets for a bit, dramatic! 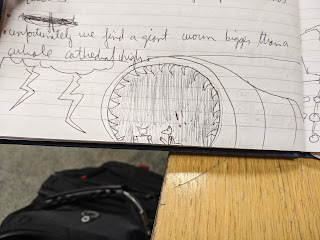 - Lots of dramatic worm fighting occurs, as the party unleashes all sorts of bullshit on my poor worm and I struggle to work out how this is all going to go. The Assault Mech clambers up the side, getting hooked on the worm's barbs. The Siege Mech canters ahead of the worm, occasionally firing back at the worm from its chest cannon while Eegor lobs the plasma ball into the worm's gullet.
--- Unforeseen Worm Damage
- Since this worm is massive and hard to kill yet also easily kited, they decide to draw it towards Salivasburger and use it as the world's biggest distraction! 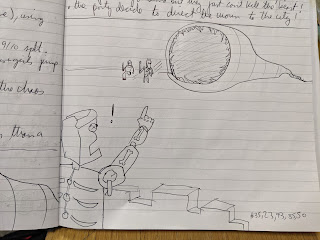 - They charge towards the city walls and leap over it in their meat mechs, and the mechs of the city leap into action! One is immediately eaten, ground into bones by the massive worm as it breaches the wall, while another does massive amounts of damage despite getting half its body ripped off.
- The party's mechs unload on the worm until it dies, writhing around the Meat Mech Hanger and chewing up loads of pre-destroyed houses.
- The party use their massive mechs to roll up the dead worm like a blanket and carry it off into the wastes. I fret about what will happen next!
Total: 5000 exp
Treasure:
- A whole Dragon Core (10000 exp)
Total: 10000 exp