New Characters:
- Aemelius Princeps, the last Emperor of the Halfling Empire, finally returned from the moon.
- Celebus Uppytus, a Necromancer who was using his Necromantic abilities to debone chickens in the Ferfectory

New Backstory:
- Iskander accidentally killed a merchant by backing over him with a wagon and took over his fledgling trading company. Allies cannot be harmed by your fumbles.
- Swan the Swift fell off the longboat during a raid on Lindisfarne and discovered he loved the water! +1 Piloting

Events:
--- The Newbies Brought Snacks!
- In a lush and verdant landscape next to a screaming well, Iskander and Swan the Swift nurse their wounds. The Draugr last time turned out to be quite tough.
- They are hungry, and conveniently a couple of people with food have shown up with food! They are a Halfling in grandiose robes, and a Necromancer with a paper bag full of chicken burgers.
- They feast, and backstories are exchanged in return. Aemilius and Celebus are filled in on the dungeon down the well. Got to be some good stuff down there right?

--- GORATH
- They climb down the well and snoop around further. Down a side corridor they find a model longship with tiny valuable model treasure in it. It looks very familiar to Swan the Swift and would be a perfect boat for a small person to ride about in.
- They take it to the entrance and explore further.
- In another room is a throne upon which sits an armoured skeleton. On the wall is a six-titted boar. On his throne are six boar-tits. I don't know why tits are the only descriptor in this module.
- The skeleton stands up and the ring on its finger glows, manifesting a massive greatsword! It bellows "I AM GORATH! DEFENDER OF THE FLAYED KING!" and loses initiative!
- Amelius shoots it in the head and Swan the Swift lobs a spear, both to little effect, as Iskander charges in and smashes the fuck out of Gorath with a heavy hammer! Celebus vomits up his own skeleton and discards his petty human flesh then charges into battle, getting immediately smashed to pieces by Gorath's sweeping greatsword!
- Amelius charges in on Police the Goat, critting Gorath in the chest and smashing him to pieces too!
- Celebus' skeleton xylophones back into shape and he stands up, pouring himself back into his skin.
- They grab the ring which allows the bearer to summon Gorath's cool ghost sword.
--- The Flayed King
- They enter the next room to find a skinned man chained to the back wall! His skin is nailed to the floor before him. He screams that he was cursed with knowledge, and anyone touching his skin will have their skin tear off too!
- Celebus, though out of Mana, declares that he will try casting Eject Skeleton again. The rest of the party quietly shut the door and wait outside. Wouldn't you know it, the spell goes wild! Luckily the spell still works, but his flesh is puking its guts up as a result.
- The others open the door to see Celebus shaking his skin out like a plastic bag full of vomit. It's quite the sight.
- The ploy pays off though, Celebus (or should that be Skelebus?) picks up the Fated King's skin no problem. He undoes the chains and kind of wriggles the King back into his skin. It's not attached or anything, so it's a bit like a flesh onesie. It hurts much less though so he's very grateful.
- He will allow each member of the party ONE QUESTION each, and duly gives over his knowledge. Celebus gains a spell, Iskander gains forbidden Dexterity techniques, Swan the Swift finds out how to improve his core Constitution, and the goat asks for the location of the most delicious paper.
- The Flayed King calls out to GORATH who is reforming outside. Despite being cursed with knowledge, he feels like an idiot for not getting his skeleton friend to help with his skin. It seems so obvious in hindsight! 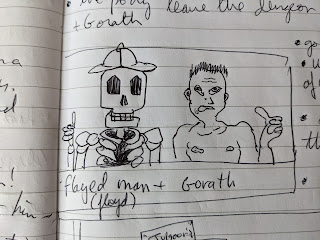 - Gorath picks the King up by the scruff of the skin and slings him over his back. Everyone leaves the dungeon in good spirits! Gorath waves the party goodbye and sets off to wonder the wild world beyond the well.

--- New Moondin
- They head back into the Shell, the way behind them fuzzing over with static. Julgoor's bank has a multitude of Julgoor bank tellers. They take the loot gladly, and the party discover that once you've paid of your Obol debt any excess wealth comes in the form of Ferfect Fried Chicken coupons. 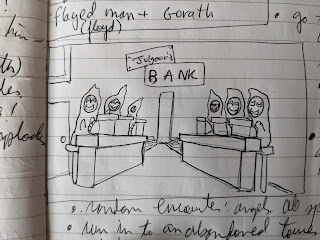 - They got to the Church of the Angel and find out from the priests that the 9G network is down! They haven't had direct contact with the Gods since Lockdown.
- The party check into a hotel and spend the night.
- The next morning they awaken and... it's the same day again? Again? Except things aren't the same, they've woken up in hotel beds this time, sometimes next to people who are waking up into the day again! Plus objects haven't been reset?
- There's a scream of "oh my god the hundred-human pie is still here!!" from the nearby Library-Colosseum.
- It all sounds a bit fucked so the party decide to head out to Kink which is hopefully much less fucked.
--- The Ghost Corporal
- They travel out of the Storm Shell once more and into an interminable heatwave. Insects buzz lazily through thorny shrubs, and larger insects swoop like swifts through the clouds of gnats. It's fucking boiling though, so the heavy armour wearers peel themselves out of their suits and drape them on the various horses and skeleton retainers they have on hand.
- As they travel they overhear a choir of angel voices singing in... English? That's new. They ignore them for now and keep going. After a time on the road they see a crumbling guard tower. Might as well check it out?
- A voice cries out as they approach, "who goes there!". It's the ghost of a soldier! Amelius distracts him by putting on airs while the others poke about. The soldier, a corporal, still thinks it's the time of the End War and that he's guarding the road from all sorts of nasties.
- Jackpot! There are 20 Iron Rations in the cupboard, emergency food that clearly nobody needs any more. Also outside in the stables are 3 animated skeleton horses. Result!
- All this stuff is duly nicked and the party continue on their merry way. Next stop Kink!
Total: 6000 exp
Valuables:
- Adorable miniature longship loot (1000 exp)
- A fancy six-titted throne (2000 exp)
- Ghostsword Ring lets you summon a ghostly Greatsword into your hands.
- 3 skeletal Steeds (3000 exp)
- 20 Iron Rations (200 exp)
Total: 6200 exp